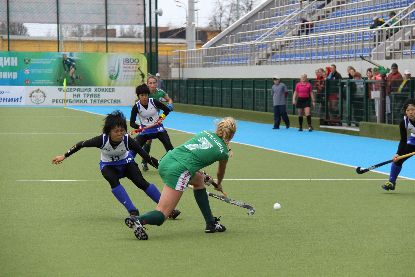 Third game, yet again the first match of the day. I think there may be a pattern here. This time I was lucky enough to draw Lisa Roach as a colleague.

Now, I can write this in public because I know Lisa’s not much of a surfer so maybe this will stay between you and me, but I’m a big fan of Lisa’s. We were on the same umpiring team back in 2005 at the Junior World Cup in Santiago and although we didn’t have a game together, I watched her a lot and really liked her style. We’re often told that one way to develop your style is to find someone high up that sort of looks like you – maybe in build, or posture, something like that – and you can emulate certain aspects of their presentation and it will work better than if you pick someone totally unlike yourself. Well, I’m no tall Aussie but something about Lisa’s no-nonsense, concise and strong presentation really spoke to me back then. I’m not sure whether I do actually look like her now on the pitch – I think I’d have to see the video to get a better idea, but I’d be pleased if I was that confident and calm-looking.

Anyway, on to the match. We knew in advance that given their previous results, this could be a very close encounter between Belarus and Italy. We also knew from previous matches that both teams had the potential to be quite feisty and with a lot on line today, that potential could well be realized. Our game plan was to be very quick on the whistle for the first 10 min. of each half to try to build in space and structure while minimizing frustration levels of the players. Hopefully that would get them into a sense of flow so we could then step back and let them play through some more.

Either the teams had a spy in our locker room overhearing our pre-game chat or our plan worked to perfection from the opening whistle, because the teams were very disciplined throughout. Lisa had an early yellow card for a ball played above the shoulder, and I followed some time later with a green for a 5m breakdown, but the players really did understand what we were getting at and wanted to keep themselves on the pitch without any intervention from us.

The radios came in handy in the second half when I called a (long) corner after the GK, to my eyes, got her kicker out the way a fraction too late when a ball came skidding through her circle. As I was speaking to the GK to explain why it was I’d seen something different than what she expected, Lisa came on the radio to say, “Keely – it’s a long.” I lifted up my head, double-tweeted and indicated the 15m was the right call, patting my chest to say “My bad”, and pointing at Lisa and giving her the thumbs up. Given that I’d had so little appealing up to that point in the game, the chances were good that I’d actually got it wrong but without any evidence to the contrary, it’s hard to just change your call. Getting the right information from your colleague so efficiently is just such a relief, and I was able to show that it was in fact cooperation that the players could appreciate worked well to get the decision right.

One of the negatives from the game for me was that in the second half, as Italy were pressing to get a goal back they starting really stretching their midfield and left a ton of space for long balls to get through from the Belarus backfield. I didn’t recognize this soon enough and I got caught a few times behind the play, so I was back to making a few of the mistakes I’d made in the first match. However, I’m not as mad at myself here because I know exactly at what point I made the mistake and why, and I think it’s an easy correction to make.