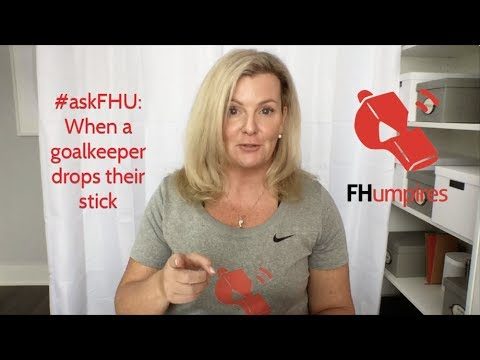 Here's the first #askFHU video where I take a look at a spicy clip from a Dutch Hoofdklasse match between Kampong and Den Bosch where the GK drops his stick and clears the ball from an oncoming attacker.

Hey friends, Keely Dunn here from FHumpires. I know, you probably all thought my head consisted of a white whistle on a red background, but I decided to do my hair today and so look slightly different.

Today’s #askFHU question came from a few fine people on Instagram: brenjduckworth, alejandroschon and alibear2809 all tagged FHU about this super fun incident. Thanks, friends! The original video clip was posted by @hockeynlopinstagram from this weekend’s match between Den Bosch and Kampong, and it’s been shared out from there.

Sidenote: if you’re not following @hockeynlopinstagram, go do so. They do really nice work with their video highlight packages and do great coverage of all the Dutch hockey.

An outlet pass flies up the middle of the pitch towards a marked Kampong attacker close to the top of the circle. As the Den Bosch defender mishandles the ball, the GK drops his stick, but continues on and clears the ball with his kickers inside the circle from the oncoming attacker.

I like the PC+YC in this situation, and here’s why.

Rule 10.3 allows the GK to do all their fun goal-defending things like kicking the ball, using their blockers and body and so on, but ONLY while they’re holding their stick. He dropped it, so he just can’t play the ball. That’s a clear breakdown in play, but the intentional element is that the GK knew he didn’t have a stick and still played the ball, not that he dropped it in the first place. The ball had popped through from outside the circle and wasn’t in possession of the attacker so the PC is the most correct option here.

Why not a PS? The foul had to either stop a probable goal, or was an intentional foul against a player who had possession or likely possession of the ball. For me, it’s not a probable goal at this stage. It’s a good scoring opportunity but the ball isn’t on the attacker’s stick, and there’s a defender right there in the mix. A lot of things could happen from here. Had it been just a 1 on 1 with the GK, or the ball was on the attacker’s stick and the GK tackled him, you’re probably getting a lot closer to that probable goal condition.

On the other hand, you could argue that it was *likely* possession but I’m just not convinced the likelihood was likely enough. At that moment, I’d give the benefit of the doubt and “reset the scales of justice” as it were with a PC. That said, a yellow card is needed here. It’s a clear breakdown, and if you could tell me the GK didn’t know he didn’t have his stick in his hand I’ve got a tropical beach property in Canada to sell you.

These are *tough* decisions, ones that no umpire relishes in taking in a crucial moment in a game. Still, it’s the correct one, and if the umpire doesn’t handle it this way he’s doing a disservice to the game.

What do you think? Does this explanation help? Did I miss something? Let me know in the comments. And if you have a clip or a scenario you can describe in excruciating detail to me on the socials, tag @fhumpires and #askFHU and I’ll put my cape on.

Thanks again friends, see you soon!